The Lost Art of Butt-Sniffing 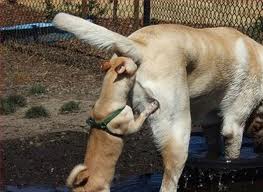 Picture this: you are out for a walk on a sidewalk in your neighborhood. Your dog is sniffing, fixating on squirrels, doing her business and generally having a jolly good time. Then around the corner comes another dog who is attached by its leash to his owner or, in some cases, off-leash with the owner nowhere in sight. As the dog approaches, your dog becomes uneasy or starts to bark. The other dog stares at your dog and says hello right in your dog’s face. Both dogs are nose-to-nose, attached to their leashes with no way out. They sniff quickly and then start growling and reacting or worse, the strange dog attacks your dog “for no reason.”

I hear this excuse every day: “The dog just attacked for no reason!” I assure you, rarely do dogs attack for no reason. These two dogs started a defensive argument because both owners let them go face-to-face and feel threatened. It would be similar if I walked up to you and slapped you across the face as I said hello. In addition,each dog most likely showed several appeasement or “calming” signals that the humans missed. Calming signals include:

These behaviors are essential in reading a dog’s other body language, too. In this case, one or both of the dogs may have stiffened, pinned their ears back, lunged forward, or raised their lip, which could be attributed to fear and insecurity. The best offense is a good defense, especially for an insecure, anxious dog greeting another dog face-to-face. Worse yet, if you let your dog go face-to-face, you are inevitably setting him up to fail. Who wants to do that?

The process sounds a lot more complicated than it is, but if you manage your dog by turning him around, the other dog will most likely know what to do. Dogs know which end is the good end! The end with eyeballs and teeth is intimidating, but the sniffing end is a wonderland of information to a dog. Next time you have a friendly dog in close proximity, turn your dog around and watch the magic happen. Your dog will thank you. If your dog is aggressive, has bitten another dog, or bitten you trying to get to another dog, please call for professional help as the behavior is a symptom of severe underlying causes. Using this technique before focusing on those causes could make your dog worse.