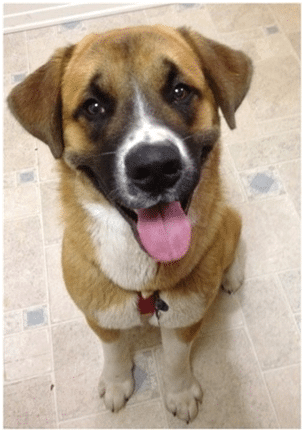 It’s hard to put into words just how profound an effect Kari Bastyr of Wag & Train has had on my life and, most importantly, on my dog’s life. Every aspect of our day-to-day interactions has transformed with her guidance. Stokely, a St. Bernard/Akita mix, had a transient existence as a puppy, and when he finally settled down with me at 2 years old, he had never learned how to walk on a leash. I tried to take him on walks, but the experience was always so unpleasant. He would jerk and lunge at everything, and I would nod in embarrassment as people remarked how he was walking me. I was given a prong collar by a family member and told to use it; I obliged and, at first, thought it was working. I could walk Stokely without him dragging me behind quite as much, but he also became so anxious (a diagnosis I can only make now with Kari’s insights) that he would refuse treats while on the leash. I was frustrated with his behavior and struggled with how to train him without using treats. I started walking him less often (way less than he needed), and as the months passed, he began to develop aggression towards other dogs. There were some encounters with other dogs on hiking trails that made me fearful of ever taking him back. I knew we needed help, but I resisted going to a trainer. I made excuses: I don’t have enough money, and I can handle it myself. The day Stokely jumped our 4-foot fence and bit another dog was a slap in the face; I finally realized I was hurting more than helping him. I found Kari through Paws on Broadway and reached out to her. It is one of the best decisions I’ve ever made.  Kari was amazing from the first moment. Stokely—a big, intimidating boy at 75 pounds—would get very excited around other people, and he expressed his excitement by jumping. Kari didn’t judge him (or me) for any of the “bad” behaviors. She was sweet and patient; her love for animals was clear as she taught me how to interact with Stokely in a more productive way. He was noticeably calmer within minutes of meeting her; I could hardly believe it. After just three sessions, I have completely changed what I feed Stokely, as well as how I feed him. She showed me how to address Stokely’s underlying anxiety, rather than aggravating it. Her training plan focused on giving Stokely a better quality of life, and I couldn’t be happier too. Kari demonstrated different harnesses to walk Stokely that would work for the both of us, and we have found the perfect one. His anxiety around walks has lessened to the point where now he happily takes treats, and I can actually begin training him. Our walks are now enjoyable and a way for us to bond. We have yet to go hiking on a trail, but I feel confident that if I put in the effort to work with Stokely, we will get there eventually.  I know helping Stokely become a well-adjusted dog will be a long process, but thanks to Kari, I feel confident in the small steps we are taking along this path. My relationship with Stokely has shifted in a positive direction, and I am grateful to Kari for her wise insights into animal behavior. I plan to continue working with her, building up to socializing Stokely with other dogs, so that he fully embodies the nickname she gave him: Yoga Stokes! Kari is truly an expert on dealing with dog anxiety and aggression, and I can’t recommend her more highly to anyone facing a similar situation. My only regret is that I waited so long to call her.  Thank you, Kari!”  Megan and  Stokely