Thanks to Kari, I not only have a transformed happy, healthy dog, but I have the tools to ensure that she stays this way 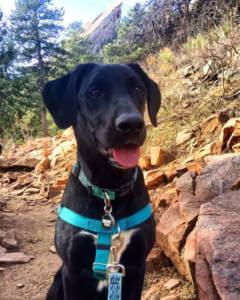 I adopted Aspen in November of 2015. I had just graduated from college and was so excited to finally have a dog to love and call my own. When I brought her home, it became clear that she was extremely fearful, to the point where she began peeing inside my apartment to try and avoid having to go outside. After trying to deal with this myself for several weeks, I contacted Kari, who I’d heard about through a dog rescue, and signed up for a behavior treatment program.

When we had our first appointment, Aspen took to Kari immediately. It was clear to me early on that Kari has a way with dogs, understanding how their minds work and their individual needs based on those processes. Kari set up a behavior plan with me, including switching Aspen’s food (so the sugars in her food wouldn’t make her more anxious) and putting her on Prozac (to increase the levels of serotonin in her brain).

The behavior training that Kari had set up for me was a huge factor in Aspen’s success, but the other factor was the Prozac. In the weeks that the medicine started to kick in were the weeks that I saw the biggest improvement in Aspen. Before Prozac, Aspen never rolled over for a belly rub… Not once. She did not want to be pet or cuddled. When the Prozac kicked in, I could tell that Aspen’s stress levels had greatly reduced. Now, she loves getting her belly rubbed and having her cuddle time.  Over a couple of months, Aspen transformed from a mopey puppy who had to be carried outside to a happy, energetic dog who was still afraid of some things, but nothing a little treat couldn’t fix.

Before Kari’s training, I had to worry about every little thing with Aspen. Were there going to be cars going by the sidewalk? Would there be a bike on the supposedly foot traffic only path? Would we have to walk by a dumpster or a construction zone? Now, Aspen will sit calmly as a skateboarder rolls by a few feet away. This used to be her greatest fear, formerly resulting in a completely shut-down, terrified puppy.

Thanks to Kari, I not only have a transformed happy, healthy dog, but I have the tools to ensure that she stays this way and continues to improve.