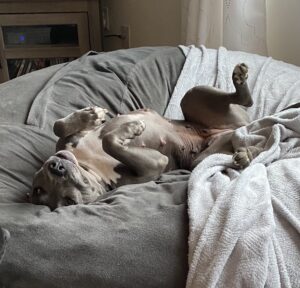 Ayla is a  beautiful, spayed, 3(ish)-year old female blue Pit Bull mix. My sister is fostering her, and I am helping Ayla find her forever home.

Ayla came into rescue from New Mexico after an animal cruelty police warrant was issued for her previous A-hole owner. She had 4 puppies (who have all been adopted), and the person who had her stopped feeding her while she raised the puppies. Miraculously, Ayla and her puppies survived and a neighbor saw her emaciated body and called the police.

Ayla is a very happy dog despite the trauma she has been through. When she got off the transport van, she weighed a skeletal 30 pounds, and has gained 28 pounds since she has been in her foster home. She likes to eat! She lives with 2 other pit bull mixes, whom she was introduced to slowly over the course of a week. She has also been introduced to her boyfriend, Lenny, a Boxer mix on-leash, and has played with him on 2 occasions. They have another date scheduled soon. (See video below).

Ayla LOVES people and toys.  She loves toys so much that she is protective of them (with other dogs), understandably so because she didn’t have toys before coming into rescue. She loves to squeak them and run throughout the house with a big smile on her face.

Ayla needs a home with a professional snuggler. She doesn’t need a ton of exercise- She’s actually pretty lazy and prefers a short walk around the block vs. running 10 miles a day. (See video below) She may do best as the only dog; However, she loves dogs. But she loves her toys more. Ayla has been very successful in a multiple dog household when she can play with her toys separately from the other dogs. Caveat- She is not a fan of hyper doodles… just sayin’.

For more information about Ayla, or to fill out an application, please click on this link.

*** Ayla did have some skin allergies, but is doing much better with a premium diet and probiotic, and will likely not need any further allergy shots.