A Client’s Story: Patience and Management are Key to Introducing a New Dog to Resident Cats

I brought home a black lab puppy to add to my family, and I already had 2 dogs and 3 cats. Andy was a parvo survivor, very mellow, friendly and had relatively good manners. I am not, and never have been a puppy person, preferring to adopt middle aged, senior or special needs dogs.  Hence, having a dog that wouldn’t get along with my cats was never a huge concern. I’ve also been lucky that my cats LOVE dogs – they curl up with them, groom them, and in the winter there is usually a huge comingled pile in front of the wood stove.

So, when I brought Andy home not knowing his past history, I was cautious, keeping him on a leash and just waited to see what happened in the house.  Well that was a disaster, he ran full speed after whatever cat he could see, who in turn hissed and screamed and ran even faster in the opposite direction.  I soon found out that Andy’s way of greeting new dog friends is to start by licking their faces and then continue on to nibbling on their necks and ears until they told him enough.  It was ok when he did that to my other dogs, who were similar in size, but it was a bit disturbing to see him running after a cat with an open mouth and clicking his teeth at them.

I started by putting up a few extra-tall baby gates – the metal ones that secure to a wall or doorframe with a small cat door at the bottom.  One at the entrance to my office/computer room, one in the hallway separating the kitchen/living areas and the bedrooms (I have a ranch style house). My cats were already used to being confined to my bedroom/bathroom during the day while at work.  Even though everyone gets along I believe that it’s better to keep them separated when I’m not home for safety’s sake. So we started there – cats confined during the day, and then at bedtime the cats would have the run of the house overnight while the dogs and I slept. No interaction at all and we started to follow Wag & Train’s cat/dog introduction protocol.

We lived like that for probably 4 weeks. Eventually I progressed to a short (10 min) session of “cat training” before bed every evening where I would put Andy on a leash and would sit on the couch and let the cats walk by if they chose.  He was rewarded with premium treats the whole time.  Occasionally I would walk him a lap or two around the kitchen (on a leash) and let him sniff the cats who had by now decided seeking the safety of being up on the counter. Andy would jump up to the counter and try to sniff/nip a cat and every time I made him sit and gave a treat.

In the meantime we had started puppy training classes to begin working on good manners and following commands.  Also, Andy goes to daycare while I am at work so he comes home nice and tired and he is way less interested in cats when he’s tired. 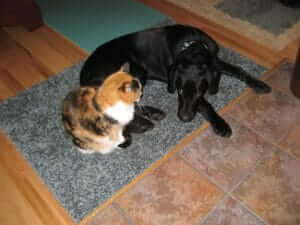 At about 6 weeks I felt like he realized the cats are part of the household – just like furniture, they’re always here, occasionally the furniture moves but it’s here to stay.  He was less interested when they walked by the computer room and one afternoon when I felt he was super relaxed I took the leap of faith and let my oldest mellowest cat out.  She doesn’t run, and that was the key.  She was sitting on one of the dog beds and I dropped Andy’s leash and held my breath for a second.  He walked up to her, sniffed her, she didn’t move, and he walked away like it was no big deal.  Whew! 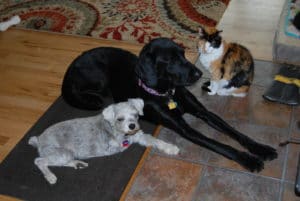 The things that I learned from this experience in no particular order are: