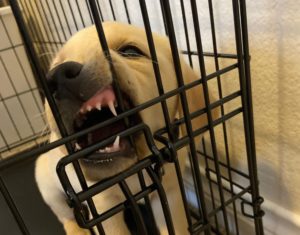 Crate Training is a process of desensitizing your dog to staying in his crate while you are gone, for potty training, or even when you are home and need a place to keep your puppy while you take a shower.  It can help a dog feel more comfortable at home because it acts like a den and provides safety from the outside world.  Most dogs actually love their crate and can’t wait to go in it.  Some dogs are terrified of it and don’t want to be confined.  However, being in a crate is the foremost training technique for setting puppies up to succeed.  The process can take many months.  But it is well worth it and your dog will thank you for it. Also, an Ex-Pen is a confinement tool that this process works for, too.

The following list describes, in detail, the order of treatment techniques for crate training.  Try not to get discouraged if your dog seems too upset while in his crate.

The most important thing is to be consistent and make the crate fun.  Don’t use it for punishment and never yell at your dog while you are putting him in the crate.  Always give him a treat when he goes in it.  Soon, your dog will enjoy having his own little den, and look forward to a really good puzzle toy!