At our first meeting with Kari we trusted her immediately 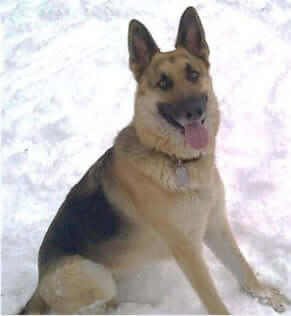 It is not an understatement to say that we don’t know what we would have done if we hadn’t found Kari! Our beloved Gus is a 2 ½ year old German Shepherd who came to us with a few issues, to say the least. We rescued Gus from people who weren’t prepared for the work of a puppy, and didn’t know he was the result of pet shop/backyard breeding situation. He was fearful of everything outside of our home, but we were in love, and thought some socializing would fix the problem. However, it turned out to be significantly more difficult than we’d imagined, even as experienced dog owners. We’ve spent hundreds of hours and thousands of dollars on obedience classes, trainers, and even a six- week board and train program. But despite our best efforts, we ended up with an 85 lb. dog that was scared and scary – lunging and barking at other dogs and people on walks, fence-fighting, and terrifying our neighbors in their own backyards. We only walked him early in the morning and late at night when the chances of seeing other people and dogs were minimal. We couldn’t take him anywhere without a scene, which was upsetting to us all and potentially dangerous as well. We were on constant alert the few times we had family or friends over. We were concerned about our ability to control him, and worried he’d actually bite a person or another dog. We were accustomed to taking our dogs everywhere with us, which just wasn’t feasible with Gus and limited our activities. We knew the issues were fear-based, but nothing we’d tried had worked to change the problem.

Enter Kari Bastyr. At our first meeting with Kari we trusted her immediately (as did Gus) so we signed up to try one more program, crossing our fingers that it would work this time. In the nicest possible way, Kari showed us that everything we’d previously been taught to do with Gus was only making the problem worse. The pinch collar method our prior trainer had assured us would build his confidence had done the exact opposite. We began using Kari’s positive, stress-decreasing techniques and saw drastic results almost immediately. Gus has responded incredibly well to the lure-based reward system. After only a few months Gus is much closer to the dog we thought he could be – happy, more confident, goofy, and playful. He is more relaxed on walks – we can actually confidently walk him during daylight hours now, which is a big step forward! We no longer run in the other direction when we see another dog. He doesn’t pull us down the sidewalk while trying to fence-fight. We can confidently have friends and family over again with no fears after the correct introduction with Gus. He loves meeting new people now instead of scaring them away. We continue to see improvements daily, and we are so grateful to Kari for showing us the error of our pinch collar ways. Gus is still most definitely a work in progress, but we’re moving in the right direction with Kari’s help. And every day we’re reminded how much we love this dog, and how grateful we are that we tried one more trainer.