After just a couple visits with Kari, I’m no longer worried about how Pippin will act in public or around other dogs. 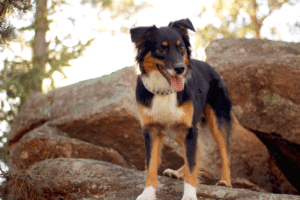 band and I adopted our 18 month old Aussie, Pippin, when he was 10 weeks old. Having adopted his brother, Cooper, who had been returned to the breeder from a family who kept him in a crate most days and didn’t socialize Cooper very well, we thought starting “from scratch” with Pip would be easy! After all, we had worked with his older brother to give him confidence and teach him lots of tricks; how hard could a puppy with a clean background be?
Pip was always super clever and he learned new tricks in minutes. When he got to be around 9 months old, I started taking him into work, where he happily greeted my coworkers and occasionally said hello to other dogs. Pip had never been super interested in most other dogs, though. He and Cooper played constantly from day 1, but for the most part, he would hang back and watch at the dog park and in other situations where dogs played together. He never seemed afraid of other dogs; just shy.
Then, one day a few months ago, my husband and I started noticing that his hackles would go up around other dogs. Specifically, around other dogs and me. We noticed he became increasingly more uncomfortable around them, and twice went after friendly dogs who got too close to his “bubble”. That was the tipping point. I knew that all the trick-training and positive reinforcement I’d already done wasn’t enough to help Pip deal with his anxiety other dogs, for one reason or another. So I found Kari.
It took one visit for her to show me how and why Pip would go from 0 to 60, and how we could give him the tools he needed to be confident and relaxed around other dogs. We worked on a few foundation behaviors, and he quickly caught on that relaxing and paying attention to me whenever he got nervous meant good things were coming.
My husband and I never really thought Pip would be the type of dog to want new friends besides his brother.  However, after a no-pressure introduction with a friend’s new 8-month-old puppy recently, we were SHOCKED to see Pip initiate play with his new buddy. He had a friend! Turns out Pip just needed the tools to meet other dogs properly and know that we’d be there to support him if he got nervous.
He also had a few slight problems walking on the leash in the past (getting distracted and going ahead, then behind, then ahead, etc.), which are all gone. POOF. I took him out for a walk this weekend where he stayed right at my side, eyes locked on me the whole time. I nearly cried! After just a couple visits with Kari, I’m no longer worried about how Pippin will act in public or around other dogs. All it took was understanding why he reacted the way he did to help him learn how to interact more productively.
Pip was always a good dog, but I feel so much better now knowing that he is happy and confident outside our home as well as inside. Kari is an absolute angel, and I’ll recommend her without hesitation to every dog owner I know. It’s so easy to see how knowledgeable she is and how valuable an asset she is to people who want better relationships with healthy, happy pups. I am so glad I made the decision to go to her and help Pip blossom!
Kait C.
Kari Bastyr2019-09-24T11:51:16-06:00