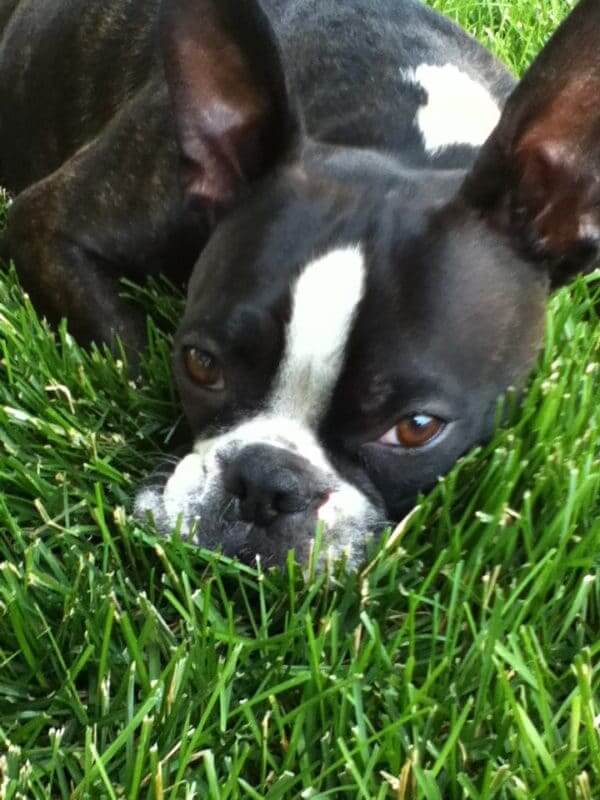 We adopted Milo in November 2011 from MidAmerica Boston Terrier Rescue (MABTR).  We met the transport van out in Aurora on a very cold Sunday night before Thanksgiving.  We figured the long weekend would give him time to settle in.  After a tumultuous start, our elderly dog went to the Rainbow Bridge 6 weeks after we adopted Milo, I figured spring would be a good time to  start obedience training.  Not knowing a lot about Milo’s past, it was obvious he had never been socialized around other dogs or people in general.

The third week into training, with only one other dog, I was asked not to bring Milo back for the final 2 classes.  I was just devastated and really felt we would never be able to do anything with Milo.  He would jump on people, go crazy around other dogs and we would have to leave him in the car until the vet called our name and then rush him in the front door.  It was horrible to have a dog that was so hyper nobody could be around him.  While he wasn’t this way with just the family, he certainly was crazed when other people came over.

After talking to Cindy, a volunteer for MABTR, she recommended Wag & Train, as Cindy had a dog she had issues with and had great results.  After talking to Kari I realized that we had done everything all wrong for Milo in trying to do the right thing for him. Milo needed to gain his confidence and we needed to work on decreasing his anxiety.  The individual training we did with Kari, while more costly than group, was well worth it.  Since his first training session, Milo is a completely different dog.  We can even walk him with other dogs now – which I never thought would be possible.  Having Kari’s expertise and knowledge gave me the confidence to work with Milo and know there could be a happy ending.  I realized the dog is not the only one that needs to be trained!!