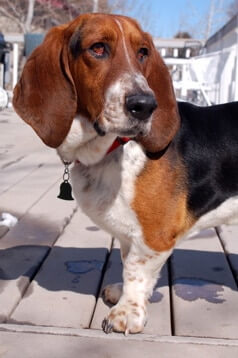 Solo, a beautiful four year old Basset hound, is our fifth “Basset Rescue” dog. He was found, either abandoned or lost, alone in an airplane hanger in Colorado Springs; that’s how he got his name. We have never had any behavioral problems with a rescue animal, but Solo was different. His aggression, especially when awakened or when he was guarding his space, led to my getting bit twice. And several other close calls. 95% of the time, he was a wonderful dog. The other 5%, he was–to use my wife’s term–Cujo. At one point, I almost returned him to the rescue people. I even considered having him put down to protect my grand kids. Instead, I found Kari online and set up an appointment. She offered immediate insight and practical help, including a name for his condition: Resource Guarding. Through her guidance and my ongoing work with him, Solo has made steady progress. Is he a perfect dog? Not yet; but with Kari’s expertise, we have made him a 99% good boy. And he and I are working on the other 1%. I am confident the two of us will get there. Thanks, Kari.