The Myth of Dominance: What Does it Really Mean?

Dominance in dog training is a widely used concept, but it is highly misunderstood. Use of the term ‘dominance’ to describe willful, disobedient and aggressive behavior in dogs often infers that these behaviors must be treated by humans through asserting physical dominance over dogs. It also supposes that dogs are genetically dominant and purposefully stubborn. Both animal and veterinary behaviorists are out to change that concept. 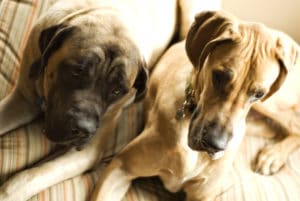 I receive daily e-mails from dog owners telling me their dog is being dominant. The dogs are challenging them, biting them and attempting to be the ‘alpha.’ Owners’ automatic reaction is to call their dog dominant when they try to take a toy away from the dog, their dog wants to lead on walks, or the dog growls when they walk by the food bowl. Believe it or not, none of these dogs I described were demonstrating dominant behavior. So why does everyone refer to these behaviors as dominant?

I think over the past 40 years, the pervasive definitions used by old-school dog trainers are still being used without regard to behavior or what is actually going on in the dog’s brain. It is easier to attribute all aggressive behavior to dominance because that is what has been done in the past. In reality, truly dominant dogs are calm and confident. They have very few behavior problems and do not need to use aggression to get what they want. It is the fearful and insecure dogs that exhibit the aggressive behaviors.

Because of my education and experience with dogs and their parents, there are three things I can be absolutely sure of:

1) Dogs are definitely not out for world domination.

2) The majority of people who have dogs, use the terms ‘dominance’ and ‘dominant’ incorrectly.

Dominance, as a whole, is synonymous with confidence and stability. It refers to the peaceful nature of encounters between animals. Dominance with in the pack means “priority access to preferred resources and permits social control” (Dodman, 2010). It also means decreased aggression in social animals. When there is aggression, it is used subtly and sparingly to set ground rules, not to enforce them. The dominant trait may be defined as influential, ascendant, prevailing, authoritative, or high in control. Dominant behavior is the exact opposite of aggressive (hostile, angry, violent) and domineering (overbearing, bossy) (Sadalla, et al., 1988). Dominance is also not the same as dominating. With regard to canine behaviors, dominance and aggression often move in opposite directions. A dominant dog is confident. An aggressive dog is insecure and anxious. Dominant animals have high, stable brain serotonin; aggressive animals have low, unstable brain serotonin. That is why increasing serotonin levels is effective for decreasing aggression. Underlying anxiety and insecurity increases behavior problems and aggression. Unless there is a medical cause, I always assume that an aggressive dog is anxious and insecure.

That is where I start in the treatment process. I do not focus on the behavior itself, as it is only a symptom of anxiety. I treat the cause of the behavior. 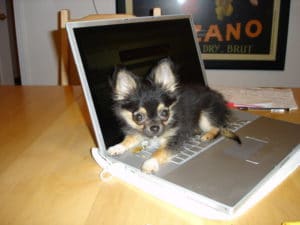 A lot of trainers who work with aggressive or fearful dogs focus on the behavior itself and speak of using physical force to “be dominant” over the dog. Some of these so-called training methods include alpha rolls, growling in the dogs face, using loud noises to startle or scare the dog into shutting down, neck jabs, collar/leash jerks (even slight jerks on the leash will teach the dog that what he is afraid of is worthy of being afraid of) and shock collars (this is a classic example of punishing dogs for a natural response, but not teaching them that what they are afraid of isn’t a threat). If a dog is shocked in the presence of another dog, the dog is going to think other dogs are bad. Yes, they may not growl or react anymore, but only because they are afraid of being shocked. You are teaching the dog not to react to one thing (the strange dog), but then to be afraid of something else (the shock). It does not create a positive association.

Whenever you use aversive methods to train a dog, you are going to increase the underlying anxiety and possibly even make the dog’s aggression worse. Or, you will stop the aggressive response to one stimulus, but because you are not treating the dog’s anxiety, you will inevitably create aggression to another stimulus. On the subject of training or not training ‘dominance’ when using physical force and control, you are actually showing the opposite of dominance. You are telling the dog that you are unstable and should not be trusted. I have heard horror stories of fearful dogs who get labeled as dominant because they have an aggressive response to fearful stimuli and are treated with physical force. If you use these types of training styles, you are only increasing the dog’s fear, not their dominant behavior.

Remember, if the dog were truly dominant, it would not be fearful in the first place. Above all, it is best to focus on what is causing the behavior, and it doesn’t matter whether the dog is dominant or not. And it certainly isn’t a good training method to try to be physically dominant over the dog yourself. Training should not ultimately amount to teaching the dog that you are the boss while being forceful or using aversive methods. Training should focus on helping the dog create a new emotional association with those stimuli that create the behavior, while helping build his confidence and decrease the underlying anxiety that causes the behavior.  If we had more confident dogs in this world, we would have much less anxiety and aggression, and it starts with not trying to be dominant in the first place.