The Three E’s: Considering Expectations, Environment, and Education in your Dog’s Learning

When I was a little girl in the early 70s, my family had a sweet 10-pound terrier mix, who was given to my sisters and I by Santa on Christmas Day.  We named her Muffin, and she lived to be 17.  I still have many fond memories of her.   In every way that she was adorable and funny, the opposite was true for her naughtiness.

Now that I work with dogs in my professional life, I look back on Muffin and think about all the things we did wrong…and we did many things wrong.  When I speak with clients who tell me all of their frustrating stories and hear about how they are ‘at their wits end’, I think of Muffin and how my parents struggled with her behavior, and I use those memories to help others in that same situation.

Looking back, I have theorized that dog owners, especially inexperienced ones, should take three things in to consideration when having a dog (or cat, or guinea pig, or bird, or turtle, etc):  Expectations, 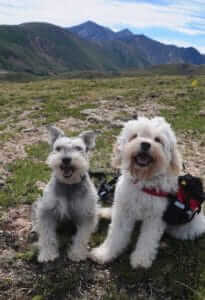 Environment, and Education…the terms I now call “The Three Es”.    Without the Three Es in your life, raising your dog could be an extremely frustrating and gray-hair-creating process.  With the Three Es, however, things could potentially go very smoothly and the human-animal relationship will prosper.

I think it’s probably safe to say that all of us have had unfair expectations of someone or something in our lifetime.  Even worse is having unfair expectations put on us by a spouse, boss, parent or co-worker.   The same holds true for our animals, especially dogs.  We had so many unfair expectations with our dog Muffin- for instance: We never potty trained her, and just put her on a long chain for her to ‘go outside’.  Instead, she always eliminated inside, always under the pool table, so she didn’t have to go in her own space.  We never took her to an obedience class, so she never learned commands- we just expected her to know what to do.  We had her on a grocery store brand of food, which was the only thing available back then- but I can only imagine how differently she would have behaved had we had the option of better food.   We never taught her how to come, and even worse, when she ran away she would be punished when she came home.  She was never walked, and chased cars her entire life.  Please don’t get me wrong- We loved Muffin to her core, but didn’t have any idea how to communicate with her in a way she understood, and it showed.

It is so fundamentally important to have fair and reasonable expectations of our dogs, and in my experience, I can tell you most of us don’t.   What is reasonable and fair?  I think that is up to each specific dog, their breed, their exercise level, and their family life.  It is up to you to set your dog up to succeed in every situation, and to not expect too much of them.

Along with having reasonable expectations for your dog, it is important to provide an enriched and accommodating environment for your dog.   It is not uncommon for me to work with dog owners who don’t walk or exercise their dog outside of the backyard, even when the dog is crated all day.  And many people don’t provide their dog with activity or puzzle toys, either while they are alone or when the humans are home.  It is not uncommon for dog owners to provide only stuffed squeaker toys for their dogs, who then shred them, and then the humans get mad when the dog chews up the couch pillows.  It is not uncommon for humans to leave food or objects on the counter for the dog to reach, or a Thanksgiving turkey on the table.  I have heard on numerous occasions that humans spend many hours trying to train their dog what not to do, when all we have to do is teach the dog what TO do.   Environment plays an essential part in both the mental and physical well-being of your dog.  Giving them adequate aerobic exercise outside of the house makes dogs tired and happy.  Giving your dog a place to go and relax, such as a dog bed, and teaching them how to stay on it gives them a sense of security.   Making sure the counters and tables are free of food, and the floors are clear of dirty socks, and the garbage is secured is your job, not theirs.

It is also important to give dogs much needed mental stimulation.  It’s wonderful if your dog has a bunch of stuffed toys to play with, but allowing them to be destructive to them defeats the purpose.  Dogs love to problem solve.  Have you ever had a dog who could get out of his crate, or open up child proof locks, or open the latch on the closet to find your most expensive leather shoes?

Put simply, give your dog a job so they have something to do.   There are several interactive puzzle toys on the market that you can stuff food treats and even feed their meals in.  Many people tell me, “My dog gives up” or “My dog gets the treat out in 3.2 seconds”.  The answer?  For dogs who give up, make it easier.  Don’t stuff a large dry treat in it so your dog can’t get it out.  Smear some peanut butter with a little greek yogurt on the inside and put a few pieces o freeze dried liver in.  For dogs who are more adept at getting the treats out, layer the smeared peanut butter and treats, and then freeze it.  Sometimes you have to teach them how to do it, and most dogs will not like the rubber toy just by itself.  Make it fun and interactive, and they will have a blast!

As with anything unknown in life, if you don’t know how to communicate with your dog appropriately and effectively, education is the key.   I like to compare training your dog to learning a new language.  Your dogs don’t know English.  In fact, they communicate mostly with body language and visual cues.  So, it is imperative that we, as humans, learn ‘dog language’.  If your dog only spoke Portuguese, and the only way you could communicate with her is to speak Portuguese, wouldn’t you learn that language?  Many people make the mistake of using an English word, such as ‘sit’, without first teaching the dog what the meaning of ‘sit’ is.  Your dog already knows how to sit by placing his rear end on the ground, but without the meaning and context of the verbal word or cue, the verbal ‘sit’ means nothing to him.    In my experience, I have seen countless people ask their dog to sit by saying it over and over and over while the dog looks to them with confusion and fear because the dog doesn’t know what the human wants.  Dogs want to please us, so why not just simply show them what we want and expect?

I believe that ‘lure reward’ training is the most effective way to teach a dog verbal language, commands, and cues.   The techniques that include harsh corrections, shock, and force are outdated and unneeded if you focus on lure reward training and teaching your dog what you want him to do, instead of what you don’t want him to do.   When you are learning something new, perhaps a task like changing a tire, putting in a new furnace filter, or learning a new computer program, what is the most effective way for you to learn?  Do you learn better when someone slowly and methodically shows you the steps and says “Yay, Good Job!” and gives you piece of your favorite food or $10 when you get it right?  Or do you learn more effectively when someone expects you to already know the steps and then punishes you when you don’t do it correctly?   Looking back, I can see why Muffin never learned ‘come’.  Whenever she got out, she would run for the hills, chase cars, and bark at strangers.  Whenever my dad would catch up with her, he would admonish her, not praise her.   For her, the payoff was in the chase, and since she was punished every time she was caught, of course she wouldn’t come when she was called.  I know I wouldn’t!

Professionally, I never recommend coercion or punishment training for anything.  While some would argue that it works, I would argue that it’s unnecessary, unfair, and abusive, especially when all the latest behavioral evidence shows that positive training works so much better- AND is better for the emotional and physical well-being of your dog.  Training a dog positively doesn’t suppress behavior, it changes the way a dog thinks about his environment and the consequences, and changes his emotional response to environmental stimuli.  For instance, if your dog is afraid of other dogs, and gets a hard leash jerk and a “NO!” or an electric shock every time she growls in fear, she will soon learn bad things happen when other dogs are around.  If your dog is afraid of people or other dogs and gets pieces of hot dogs and tons of happy affection when other dogs are around, your dog is going to have a more favorable opinion of other dogs.

The importance of education for dogs is essential.  The importance of humans educating themselves about educating their dogs is critical!   Finding the best way to communicate with AND teach your dog go hand in hand- they are not mutually exclusive.   While you may be ‘teaching’ your dog by punishing him for doing it wrong or acting inappropriately, you aren’t communicating fairly or in the dog’s language, and your dog will find other ways to express his fear and frustration.