My Dog is Allergic to Minnesota: My Path to Treating Her Allergies Naturally

In 2017, Paisley and I moved from Denver, CO to Minneapoli 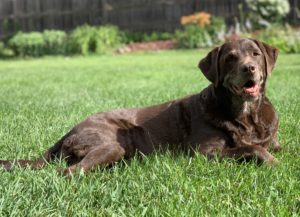 s, MN.  She was 7, and was born and raised on the Front Range of the Rocky Mountains. During our first spring here, Paisley developed horrific skin allergies. She itched/scratched constantly and had huge blisters all over, along with red patches and she lost a lot of her hair. It was apparent that she was allergic to Minnesota, because she never had issues in Colorado.

My vet prescribed Apoquel, and I gave it to her right away. She had immediate relief. Like freakishly quick. I thought it was a miracle drug. She took it all summer/fall and only had some mild allergic flare-ups. In November, I took her in for her yearly wellness check and because she was 8 by that time, I had them do a senior blood panel. My vet called and said that her neutrophil count was low, and to recheck in 2 months. On January 11th, 2019 I had another blood panel done, and my vet called with devastating news: Paisley’s neutrophil count was under 100. So, it was time to see a specialist.

After consulting with the internal medicine vet, Paisley had a bone marrow biopsy. The biopsy is typically done in one shoulder and is done under general anesthesia. The surgeon drilled in to her left shoulder, but couldn’t get a good enough sample, so had to drill in to her right shoulder. It was AWFUL. It was really difficult for her to walk and she was in constant pain for at least a week afterwards. Long story short- There was no sign of cancer but she was diagnosed with something called ‘Immune-Mediated Neutropenia’, which is a side effect of immune-suppressing drugs like Apoquel.  Her body was attacking her white blood cells like they were invaders. She began tak 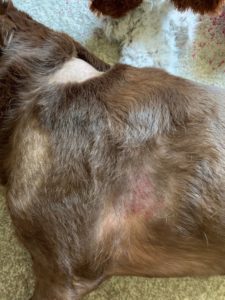 ing medications to rev her immune system back up. My vet said that if she got an infection, her body wouldn’t be able to fight it. Paisley became very sick and lethargic, and I was told she could live another week, or another couple years.

In the meantime, I had to figure out a way to treat Paisley’s allergies without any immune-suppressing drugs. I am a firm believer in using a natural, or at least a functional medicine approach for my own autoimmune diseases, and wanted to to try the same approach for Paisley. Last summer, her allergies were terrible, and I am anticipating another rough season this year. I am beginning her allergy regime now, and thought I would share what I am doing. Note: I am not a veterinarian, and I recommend checking with yours before you treat your dog’s allergies. I am a huge follower of Dr. Karen Becker, so you can always point your veterinarian in her direction if s/he isn’t familiar with functional/integrative veterinary medicine.

An all-natural approach means a lot of trial and error, but you also must give things time to work. My biggest take away from this journey is this: Think about shifting your paradigm to treating your dog’s allergies from the inside out, instead of treating the symptoms. A leaky gut, yeast overgrowth, feeding kibble/starches, and a weakened immune system can be the biggest culprits for allergies.