It’s So Gross! Why Do Dogs Eat Poop?! Tips for Eliminating Coprophagia

In August, I adopted a little brindle puppy from a local rescue, and her name is Turtle.  She is in training to be a gluten-detection service dog, and has a wonderful temperament. Like all dogs, she is well-behaved 98% of her life, with the exception of one thing: She eats poop. And she LOVES it. In veterinary behavior terms, poop eating is called ‘coprophagia’ and it’s very common. I also have a 10-year old Labrador, Paisley, who went through the same phase when she was a puppy.

I think Turtle’s habit started early this fall when she realized how yummy rabbit poop is. She would hunt for it in the grass every time we went in the yard and act like every piece was an entire plate of nachos. Maybe she thought the grass was one big snuffle mat, and rabbit feces was her treat. She became obsessed. And in fact, I think rabbit poop was her gateway drug to bigger and better poops, because soon she started eating Paisley’s poopsicles once the Minnesota winter hit. I was so repulsed and frustrated, and I became one of my own clients on a quest to figure out how to stop her.

First, I wanted to determine why she was doing it, and then work on how to stop her. Most behavior problems are a symptom of underlying issues, and coprophagia is one of them. I am not interested in a ‘quick fix’, as I want long term results.

~ She’s a puppy and puppies eat a lot of things they aren’t supposed to
~ She thinks she’s starving, or isn’t getting enough to satiate her, or is missing nutrients in her diet
~ She’s anxious
~ She’s bored

It’s a fact that poop-eating is a normal behavior for dogs, albeit nauseating. Mama dogs do it when the puppies are neonates to keep the den clean.  Female dogs are more likely to eat poop because of this, and Turtle is indeed a girl.

To top it all off, when her coprophagia was at it’s worst, I injured my knee and was on crutches for about 3 weeks. I couldn’t walk her, and I couldn’t go out in to the yard with her. It all came to a head one night when she had to go outside in the middle of the night, and Paisley went with her. Paisley happened to poop and Turtle ate it before it hit the ground. SO GROSS. Nothing I did from the doorway could get her attention. She was as hyper-focused as my clients’ dogs when they see another dog and lose their marbles. When she came in, I went back to bed and then she vomited. And before I could get my crutches and cleaning supplies, she ate it again. And then vomited it up again. And on my new rug, no less.  I have never been so disgusted in my life, and I was mad.  I was dry-heaving and I pledged to figure out a way to stop her from doing it anymore.

That morning, I started Turtle’s 12-Step program for her drug of choice, and I am happy to say her coprophagia has diminished significantly and I couldn’t be happier! 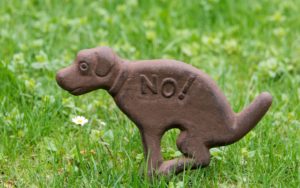 Here is a list of all the things I implemented.

*  I started going out with her on a long line so I could recall her quickly and pull her in if need be. She always gets cheese or Ziwi Peak immediately when she comes inside, even if it takes her 10 minutes to listen.
* I let my dogs out separately so she doesn’t have access to Paisley’s poop.
* I try very hard to pick up all the poop right away. It has been difficult on crutches, in deep snow, in subzero temps but I do it. So, if I can do it, I know you can!

*note: Coprophagia is considered a ‘pica’ behavior, which means ‘eating inedible things’. It can be attributed to anxiety, stress, and/or obsessive compulsive disorder.

* Because Turtle had to be on 10 days of anti-biotics for a bladder infection at 10 weeks old, I added a strong probiotic to boost her good gut bacteria and neurotransmitters. Anti-biotics kill off the good bacteria, so it’s important to build those back up and it takes time. Plus, anxiety starts in the gut!
* I added wild-caught krill oil to decrease inflammation in her digestive tract.
* I feed all of her meals out of several puzzle toys to make her tired. Her breakfast is in a Green Feeder. Her snack is in a Fun Feeder (frozen). Her dinner is in the Green Feeder, and her second dinner is in a HyperPet SlowFeed mat that I freeze.  She also gets Ziwi Peak and Happy Howie’s for treats.
* I started her on 200mgs of L-Theanine twice a day.

* I feed both of my dogs a combination of dehydrated raw, raw meat, bones, and veggies. So, I increased the amount of meat I am giving her. In essence, I feed her twice as much meat. My goal was to help her feel more satiated, and make sure she was getting all the right nutrients.
* I let her eat as many veggies as she wants. I started with root vegetables, and then added squash, cucumbers, and green beans. She also gets blueberries, apples, canned pumpkin, and some Lundberg organic rice (rinsed).
* I feed her more often. She gets breakfast, a snack, dinner, and then a second dinner.  So far, she has not gained weight, but I am keeping on eye on that.
* In case she is attracted to eating ‘warm’ food (fresh poop is warm) I started heating up her food for 20 seconds.
* There is anecdotal evidence that the enzyme bromelain (papain) can work to make the taste of poop less appetizing. I haven’t tried it with Turtle yet, but it is available for purchase on Amazon.

* I work tirelessly to continuously train a solid ‘Leave It’ and ‘Watch Me’… which is still a work in progress.
* I started a ‘Whistle Recall’ program… that, too, is still in progress but she really loves food and the sound of the whistle, so it’s working well.
* I focus on working with her more during the day, both on basic commands and her service dog training. I want to tire her out mentally so she is too tired to go out and eat poop. 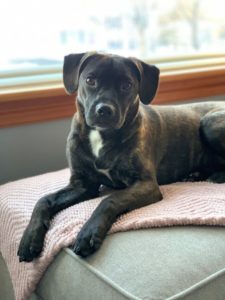 It’s ultimately important, as with any behavior, to figure out the ‘Why’ not just focus on changing the ‘What’.  I know there are a lot of pieces of advice on the interwebs about feeding pineapple, using deterrents like Tabasco sauce or dish soap, and sprinkling a powder in a dog’s food to make it less desirable. However, I chose to look at what might be causing Turtle’s coprophagia instead. I feel that I owe her more than a ‘quick’ fix, and I also didn’t want to add anything harmful to Paisley’s food, because it’s her poop Turtle eats, not her own. And I certainly can’t add anything to the rabbits’ food.

This comprehensive treatment plan I dubbed “Operation Turdle”, has been a complete success so far. But I am going to continue everything in the program for another few months so Turtle’s poop-eating doesn’t return this spring.